Mount Ridley Mines wholly owns the Mount Ridley project near Esperance, Western Australia. By reanalyzing its historical drilling data, it announced a wide range of rare earths mineralization, which is impressive for a length of 25 kilometers.

The intercepts from the five mineralized areas contained 16m total rare earth oxide (TREO) content of 2,020 ppm, of which The Lake exploration area, some ore grades peaked as high as 10,461 ppm TREO. In total, more than 20 samples returned grades higher than 1,000 ppm TREO.

The results are in line with the re-analysis procedure for 950 air core samples previously drilled for nickel. The company interprets rare earth mineralization as a large horizontal flake lens from near the surface to a depth of about 89m.

Based on the data generated during the nickel drilling activities of the Mount Ridley project in the past five years, the relatively shallow accumulation of rare earth elements found on the company's widely held land is the result of a re-examination of the data. 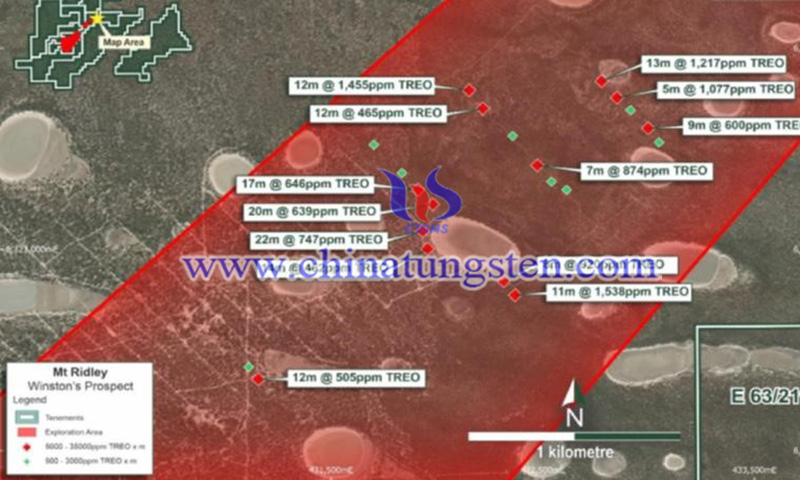 Along the 25-kilometer extension, the company divided the discovered mineralization into five exploration areas. Importantly, management stated that mineralization is open in all directions.

Mount Ridley said that in the mining area in the far northeast of Winston, the mineralization covers an area of 2.6 kilometers by 1 kilometer. Results from another 160 samples near Winston are still unavailable.

In the Lake exploration area, about 3 kilometers southwest of Winston, a large mineralization zone of 3 kilometers by 1.6 kilometers has been identified.

One step further southwest of the Keith exploration area, drilling returned a striking 1m hit, reaching 10,461ppm TREO at only 23m, located within a mineralized area covering 2km by 1km.

The company is focusing on drilling 25,000 meters in five exploration areas, targeting the extension of known mineralization through hollow drilling and identifying resources through reverse circulation drilling.

The company also plans to conduct diamond or sonic drilling to generate representative samples for geotechnical and metallurgical testing. In addition, to determine the source rocks for rare earth mineralization, geological and petrogeochemical studies have been initiated.

According to reports, the type of rare earth mineralization found on Mount Ridley is an ion-adsorbed clay type, most commonly found in southern China. According to management, China accounted for more than 90% of global rare earth production and supply in the past decade.

It is not easy to find ionic clay rare earth deposits outside of China. Mount Ridley has discovered 25 kilometers of mineralization at its Mount Ridley project in Western Australia.

Due to the application of rare earths in modern technology, they have become more and more important worldwide. If it succeeds in identifying the resources, Mount Ridley Mines may become one of the few mines outside of China that can sustain its economic shortage of ionic clay mines-the initial length of 25 kilometers may not be a bad start.