Happy Creek Minerals Ltd. ("Happy Creek" or "Company") is pleased to report that a skid-mounted diamond drilling rig has been transferred to the Fox Tungsten project ("Fox Tungsten"). The Fox Tungsten is wholly owned by the company and is located in southern British Columbia.

In Colombia, Happy Creek focuses on new discoveries and resource construction near the infrastructure of the company's wholly-owned diversified metal project. The company's management, board of directors, and technical consultants have solid expertise and depth in the field of mineral resources and capital markets.

At Fox Tungsten, at least 2,000 meters of drilling will test promising tungsten ore targets that can be reached via logging roads in the Nightcrawler- Creek area.

Tungsten is a rare, heavy, and hard element, mainly used in high-tech applications such as cemented carbide and high-speed alloy cutting tools. Tungsten has been declared a "critical mineral" by the governments of Canada, the United States, and the European Union. At present, 85% of the world's output comes from China, and China still has a dominant position in the field of tungsten exports. 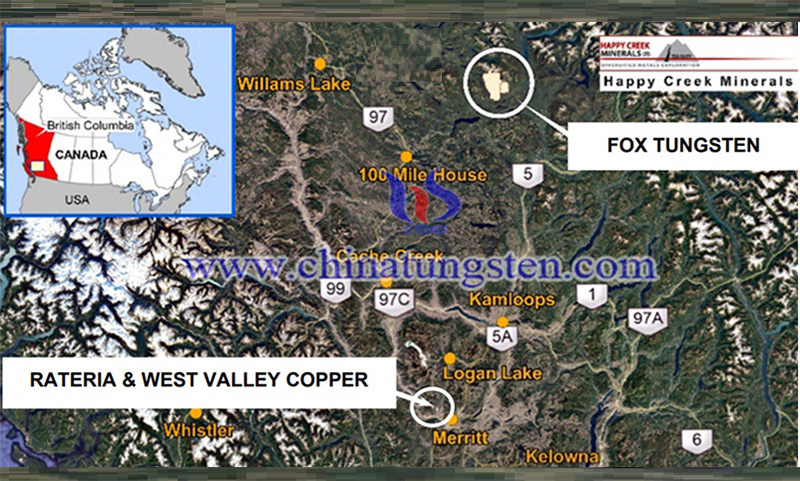 Due to the lack of drilling contractors, especially experience in helicopter-supported drilling, previously announced plans to drill for gold and silver targets on the nearby Silverboss project have been postponed to 2022.

Happy Creek Interim President and CEO Michael Cathro said: " Fox Tungsten is the Company’s most advanced project and Management believes the Nightcrawler – Creek area is one of the best areas to add high-grade tonnes at shallow depth."

Two twin goals in Happy Creek’s 2021 drilling plan are to expand the known mineralized areas and tighten the drilling spacing to allow the first resource estimate for the Nightcrawler- Creek area.

This will increase the Fox Tungsten project’s existing resource estimates for three deposits, which are located 5 kilometers to the north. The drilling program will begin in the Creek East area and will include gradual expansion around the high-grade mineralization found in borehole F20-06 in 2020. (See April 12, 2018 report entitled “NI 43-101 Resource Update for the RC and BN Zones and Maiden Resource Estimate for the BK Zone of the Fox Tungsten Project British Columbia, by Pierre Desautels, P. Geo, AGP Mining Consultants Inc. and Paul Berndt, FAusIMM)

The hole intersected 3.38 m at a vertical depth of 110 m, graded 1.08% WO3 (tungsten trioxide), and opened hundreds of meters in all directions. Another important consideration is that tungsten is present in the 80 m thick calcium silicate (skarn) host rock, which is one of the thickest layers found in Fox Tungsten so far.

Drilling will initially focus on the area north of hole F20-06 in the 2020 borehole, where tungsten mineralization is expected to be closer to the surface. In 2021, the megaliths (mainly tungsten mineral) and subspecies of calcium silicate host rock was found in the geological work of the Fox Tungsten project.

Happy Creek Minerals will also conduct the drilling on other targets further west of the Nightcrawler-Creek target area, where the previous drilling encountered good grade and/or thicker tungsten mineralization zones. The drilling plan is expected to be completed in October, and the test results are expected in early December.