Posted by: Chris Na 2021-07-18 Comments Off on Phase 3 of Rare Earths’ Exploration Drilling in Makuutu East

Ionic Rare Earths' Phase 3 exploration drilling has identified extensive thick mineralization at the Makuutu East area in Uganda. Assays from 56 of the 67 rotating jet holes drilled in the project showed that in many target areas, the total rare earth oxide mineralization is higher than the critical value of 200 parts per million (ppm), and the cerium oxide (TREO-CeO2) is less estimated.

More interestingly, Ionic Rare Earths (ASX: IXR) pointed out that the mineralization of rare earth elements has been intersected in between target areas previously determined by the response of radiometric measurements, indicating the presence of red clay hardtops on the surface.

This new Phase 3 drilling confirmed the extension of rare earth-containing clays, and it was verified that the hard roof was buried by more than 1 m of soil in some areas, which obscured the radiation response. The results show that a large number of exploration areas previously due to lack or weak radiation response will also be followed up.

Managing Director Tim Harrison said that the Phase 3 RAB test results have successfully confirmed the great potential of Makuutu East. Through the determination of the direct expansion of resources, its potential has exceeded the previous radiation measurement targets, and exceeded the prediction of ion-adsorbed clay (IAC) mineralization outside the basin.

"Now, we will conduct preliminary salt desorption tests to confirm the metallurgical characteristics of these new mineralization areas, because some of the mineralization seems to derive directly from granite, which may be more consistent with the IAC deposits in southern China,” he explained. 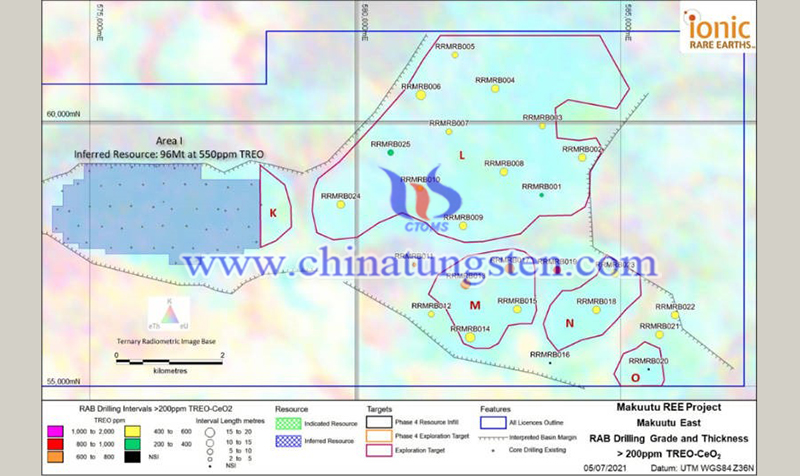 The Phase 3 drilling analysis confirmed the importance of Makuutu as a world-class deposit. In short, its rare earth-containing clay seems to be much more than we initially expected.

Given that its mineral resources are estimated to be 315 million tons with a grade of 650 ppm TREO, this may support the 27-year life cycle to operate the production of critical rare earths, which is of great significance. These results indicate that with further drilling, its scale is likely to grow substantially.

Makuutu East is understood to be a continuation of the sedimentary basin of the resources through aerial magnetic and radiometric measurements. Of the 25 RAB holes drilled in the area, 23 intersecting clay or saprolite carried REE mineralization.

At Area L, interpreted to be the northeastern continuation of the Makuutu resource, drilling shows that the area is always mineralized above the 200ppm cut-off grade, with an intercept thickness ranging from 4m to 17m and a grade ranging from 331ppm to 589ppm.

It is worth noting that four of the holes intersect metamorphic sediments and fault zones, indicating that they may be located outside or on the edge of the Makutu sedimentary basin.

In addition, from the RAB hole drilled in the central area to the test area previously excluded low radiation response, the returned results show that the mineralized and sedimentary basin extends further south than the current interpretation.

Results of the rare earths mineralization are pending for the Makuutu western zone in Phase 3.