Molybdenum – One of The 9 Trace Minerals

Molybdenum – One of The 9 Trace Minerals

Do you know the two types of minerals necessary for the human body? These go by the name of major minerals (macrominerals) and trace minerals (microminerals). Although these two minerals are equally important, the demand for microminerals is much less than that of the main mineral, and molybdenum is one of the microminerals.

Much like vitamins, a balanced diet should provide enough minerals to maintain the normal function of the body. We are here to take you through the nine trace minerals, their purpose in the body and where you can find them.

Iron plays many important roles in the body, the most widely known is to help the body fight tiredness. Iron can be found in many animal products, including red meat, fish, egg yolks, and shellfish. For vegetarians and vegans, iron can also be found in leafy green vegetables and fortified grains. If the diet does not support adequate iron intake, you can also choose to take iron tablets.

Zinc is a trace element necessary for the function of the immune system. It has also been found to help maintain strong bones and contribute to normal reproductive development. Just like iron, zinc is found in all kinds of meat, fish and vegetables.

Iodine plays an important role in psychological performance. It is mainly found in seafood and foods grown in iodine-rich soil. This makes it fairly hard to source, but since it is a trace mineral, this isn’t too much of a concern.

Selenium is an essential trace mineral required for the formation of hair and nails. Similar to most other trace minerals, it can be found in meat and seafood. Selenium can also be found in certain grains. 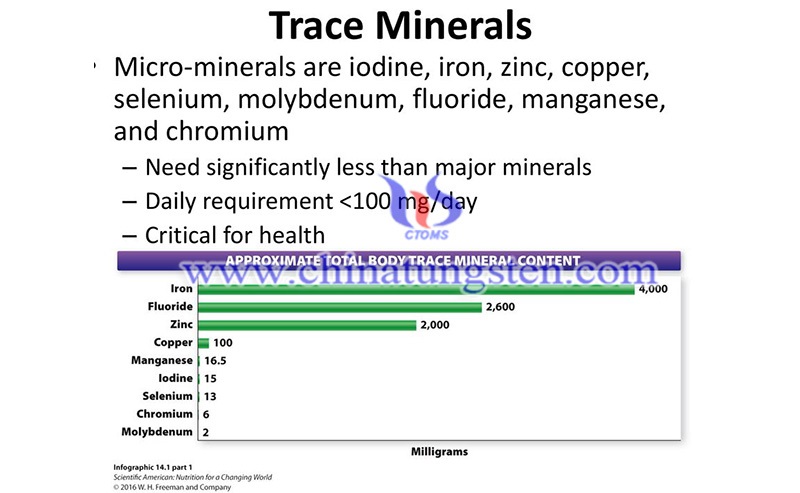 The body needs manganese to produce energy. Not only that, but it is also important for brain function. Manganese is mainly found in plant foods and is easily obtained by vegetarians. Therefore, it rarely needs to be supplemented.

Fluoride is related to strengthening tooth enamel. It has been found that fluoride salts help keep teeth healthy. Drinking water with fluorine added will help you achieve sufficient mineral levels. It can also be found in some fish.

Chromium is important for your blood sugar levels. It also promotes metabolism. Chromium can be found in unrefined foods, including liver, whole grains, and nuts.

Molybdenum is an antioxidant that helps cells resist aging while supporting normal cell functions. This mineral can be found in beans, grains, green leafy vegetables, and milk.

Now you know exactly where to find the nine trace minerals! All these microminerals can be sourced through a balanced diet.

Link to this article：Molybdenum – One of The 9 Trace Minerals